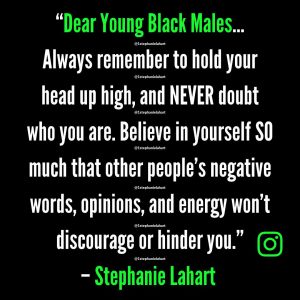 Over the past few years I have worked with various groups of teen boys. As a matter of interest – all black! ALL of them have some kind of label associated with a wrong path – and truth be told, many have pending court appearances 🙁 I have enjoyed every interaction and I have never had a bad experience with any of them. In fact if they see me on the street they do something that most teens boys just don’t do. They holler out my name to make sure I see them and if we are passing by each other they give me a hug….and I hug them back These are young men who I don’t know much about – other than their name – and if I can’t call the name I definitely know the face.
Recently I have been working with a specific bunch of teens labeled “at risk” – I hate that phrase. We are all at risk for a whole slew of things. Some of these young men have has the most phenomenal experience coming to the prison and having heart to heart discussions with our incarcerated men. CHANGE is noted in these youngsters!!
WHY HAVE I BEEN DOING THIS?? Because for the 17 years that I have been running the Etiquette Class for Girls, I have become increasingly concerned about the direction many of our young men are taking and while I do believe that there are some phenomenal men in our community who CAN make a huge difference – and many that I know personally – I don’t believe there are enough. And there are far too many men and absent fathers who are doing little to nothing. Additionally I have teamed up with other phenomenal women overseas who are running dynamic programs for young men and also making a great impact.
IT’S TIME I TAKE THE NEXT STEP!
Today confirmed that I am making the right decision as yet another one of many situations happened. . As I was walking through town a bus full of students went by. I heard a male’s voice holler through the bus window: “MS SOMNERRRRRR!” I looked and I recognized the face. It was the young man who recently said to me, “I can’t believe I sat there and listened to you talk for an hour! I haven’t sat this still to listen to anybody that long ever – even to my teachers!” (His teachers confirmed this is true). I stopped and waved as the bus was coming to a stop at the traffic light. He continued shouting through the window as he leaned across the passenger sitting directly at the window: “WHEN ARE YOU COMING BACK BECAUSE I NEED YOU IN  2020. I HAVE GOALS!”
OMG I wanted to run through the traffic and hop on that bus and hug him. THIS is a black male, approximately 15 years old, who is identified as “at risk”. I promised him that I would see him again – and I will.
Adults who have seen me in action with these groups tell me how awesome they believe. I humbly shrug because for me it’s nothing more than that which I love doing! It’s my calling. I am committed to making sure our young men pursue their dreams. I expect the negative chatter and the naysayers who insist that only men should work with boys. But most importantly I will be motivated by those who say and know I can. Stay tuned. The next step is coming…..
Back to top